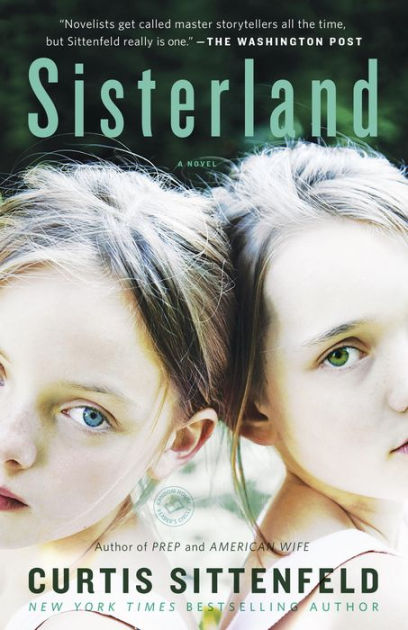 Daisy and Violet are twin sisters who have a gift. But Daisy has changed her name to Kate, married a lovely man and had children, burying her gift and all it means to her, and gained precious normality. But when her sister makes a psychic prediction to the public about an upcoming earthquake, Kate’s life might be blown apart.

While it sounds like an interesting book about intuition and women, it’s actually more of a domestic drama about sisterhood. So it’s not a paranormal drama, though it has a little of those elements, in a mundane sort of way, which gives it a little flavour rather than being a main plot point.

After reading this book, I’ve decided that I’m not really a Sittenfeld fan. I’ve also read her book American Wife, (if you’re interested, the review is HERE), and though I like her literary writing style, her characters don’t really appeal to me much, which makes her books a little hard for me to slog through.

For example, in this book. Kate constantly makes note of every female characters weight, whether they’re thinner than her or not. She doesn’t like that she’s gained weight, but does nothing about it. She also is a complete doormat. Her twin sister Violet gets away with everything, and is a pretty awful person, completely self absorbed and attention seeking. I think we’re meant to feel sorry for her? At one point while staying in her sisters college dorm she assaults another student and then blames Kate in an effort to get her kicked out. Violet then tries to make Kate feel guilty for kicking her out, and annoyingly, Kate feels guilty. It’s all kind of enmeshed. I found it really irritating and it was hard to care about them.

The plot also moves a little slowly for me, shifting between Kate’s past and what’s unfolding now. I quite like stories that unfold like this, with pieces falling together. There’s no great mystery at the heart of this story, but more a sense of characters starting to make more and more sense as their pasts are revealed, leading up to the earthquake (will it or won’t it happen?). In this case, it just felt a little long winded and the bits of the past shared with us aren’t fascinating or greatly revealing.

In essence, it’s not that this book is bad by any measure, it’s really just that I didn’t enjoy it. And at heart that’s because it’s long and the two main characters are pretty weak and not nice, and a lot of the people around them aren’t either. All of their problems are self created really. But Sittenfeld does have a way with words.

Read It If: you like family dramas and personal stories, or if you had a sister who tried to ruin your life.

2 thoughts on “Sisterland by Curtis Sittenfeld”