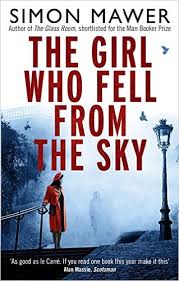 During World War II, Britain sent spies into Occupied France, many of whom were women. This book tells the story of what that experience would have been like. Marian Sutro has fled to England with her parents and brother, and finds herself selected, as a French speaker, to go undercover to France to assist the war effort there. However, it soon turns out that there’s more to her being selected than her ability to speak French: her connection with a man from her youth, a scientist living in Paris, who might now be able to help the British government.

It’s a great premise for a book, and should make a great story, but somehow it doesn’t quite. In all fairness, the book is fairly well written. But it has two main flaws: firstly, the book follows the training of the operatives in great detail, which takes up the main part of the book. When Marian gets to France, though, when it starts to get interesting, it suddenly speeds up. To me, this is when the actual story should begin. Not that training methods are not fascinating, but the point of them is their usefulness in the field. When Marian gets to the real job at hand, the events seem to all take place in the space of about three weeks. She almost immediately breaks her cover when she meets people she knows, which I found strange. She makes some very odd decisions like that. The ending, in this sense, also feels rather tacked on. Spoiler: At the very end, with herself exposed, she opts to stay in the field, for no reason, where she can no longer do any good, and is IMMEDIATELY captured, of course. How very silly.

Secondly, it’s very clearly a woman written by a man. There are some amusing moments where certain female body parts are incorrectly named, or behavior and thoughts are most definitely woman as interpreted by man. It just doesn’t gel.

That said, though, the stories of the bravery of the women should be told, so perhaps the book has merit for that reason alone, and there is a deal of entertaining suspense. A flawed, light read with some redeeming qualities.

Read It If: Should please the WWII buffs, spy novel fans, or those interested in women’s history, though it’s a fairly light read.