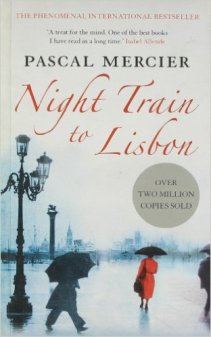 A man whose life has been entirely devoted to his teaching of ancient languages and books finds himself walking out of his life one day when he comes across a book that speaks to him. He walks out on his classes and heads to Portugal to find the author, and to discover the man whose life has affected his.

It’s not giving too much away to let you know that when he gets to Portugal, the man who penned the book has passed away, but Gregorius talks to new friends and people who knew the doctor who wrote the book, and starts to piece together the broken man who wrote so stirringly about life and the human condition, and the event that drove him to a huge guilt that he had to try to atone for.

There are a few books like this, where someone finds a written work, a diary or letters, sometimes a book, and through reading the document comes to understand something important about the other person and their own life. It’s a sub genre that is endlessly fascinating in all it’s incarnations because we are given a mystery and are only given clues and pieces slowly, often unfolding a tragic history or a great romance, family secrets. Here, a man slowly comes into view, as well as the political history of Portugal, and due to the wonderful writing of Mercier, we’re drawn in and are asked to think about the philosophies that the doctor has written about, the life of Gregorius, and the nature of change, aging, friendship and marriage.

It’s all good stuff, and though perhaps the genre has been done before, there is a great deal to catch the interest here. I loved the setting, crossing Europe to explore the streets of Portugal, and back to Switzerland where Gregorius is from. And the character of Gregorius, who perhaps sees himself as rather small and dull, a lonly figure,  juxtaposed against the charisma of the elusive Prado whom he is searching for makes for thought provoking reading.

I also discovered a film version of this book, starring Jeremy Irons, that you might like to check out, if the book doesn’t appeal, though it appears to have sold quite a lot of copies and been very popular.

Click here to get your copy of Night Train to Lisbon

8 thoughts on “Night Train to Lisbon by Pascal Mercier”