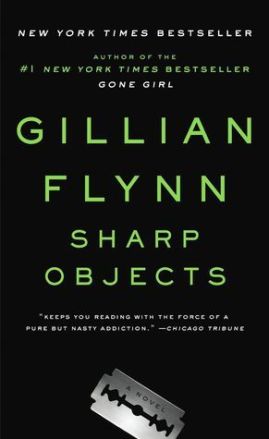 Sharp Objects is Gillian Flynn’s first book, and has just been made into a TV series. It’s the story of Camille, a journalist, who has made an uneasy peace for herself in her new life in the city. But her past in a small town comes back to haunt her when she’s assigned to cover the story of two girls who have disappeared in the small town she grew up in.

Staying with her cold mother and her odd 13 year old half sister, Camille starts to look into the disappearances but finds herself drawn back into the darkness that lies at the heart of the town, and the darkness in her own past.

It’s a really strong first novel, which means that it’s interesting and keeps you turning pages, but has it’s flaws. I’m not sure if it’s meant to be a mystery, because it feels like you have all the answers as to who did what from the opening chapters, but it’s really interesting to see it all fall into place and how things play out. It’s a dark novel, taking in themes of death, murder, crime, abusive family dynamics, self harm, and scenes where Camille in her 30’s does drugs at a party with her 13 year old sister.

Camille is a self destructive character, but not unlikably so. She makes really emotional, foolish decisions, and you do have to wonder if she really would be assigned to cover this story. But on the other hand, it’s fun to just let the book take you by the hand and lead you. Gillian Flynn writes about women in an interesting way. Sometimes they’re tough, often they’re damaged and unable to get out of their own way, and sometimes they’re calculating and manipulative. It’s different, and I like that.

Read It If: if you like Gillian Flynn and similar best selling/crime type authors, you’ll enjoy this. It’s not high art, it’s not perfect, but it’ll keep you turning pages.