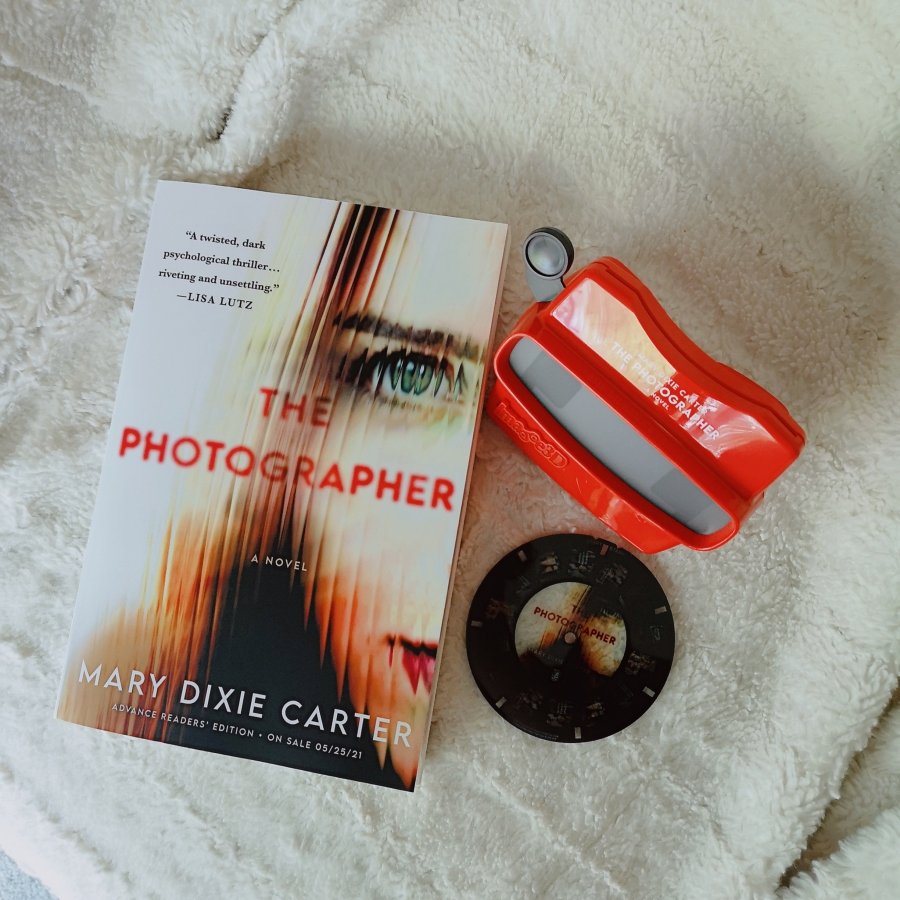 Delta Dawn (no really) grew up poor and unloved, but has made good by becoming a successful family photographer amongst the wealthy New York elite. She longs for a better lifestyle and sense of belonging, and when she’s hired to photograph Natalie Staub’s 11th birthday, she yearns to become part of the lives of the Straub family. She wants what they have, and her obsession starts to take over.

A theme in this book is Delta’s ability to manipulate and create an image. She does this through presenting a certain life and ingratiating herself into the family, and lying about herself and her life. But she also does it through photoshopping images for her clients, to make the families look happy and create moments that never happened, and also keeps a folder of her own with created photos of things she wishes happened, putting herself into other people’s families and creating memories and scenarios that never were. It’s really creepy.

This ARC came with a promo viewfinder with a reel that relates to the book and the photos that Delta takes, which I think is such a great tie-in. I do love view finders. So, I included a photo of that.

This book has been described as “You” meets “Parasite”, which is a pretty good description. It’s not a super heavy read, it’s a little light, but not in a bad way. It’s an entertaining ride, as Delta meets the family and then latches on in her stalking and obsession with them and their life. The book is melodramatic. The characters are all a lot and seem to not have normal boundaries and all have big emotions. But we are seeing them through the eyes of Delta, who is a lot of drama herself, and I feel like it’s a choice the author has made.

And Delta is kind of great. I mean, she’s a terrible person, but reading about her and the things she does is like watching a train wreck. You know she can’t really have what she wants. You’re not sure how far she will go. And you can’t look away. A lot of the things she says and does feel all too psychologically real for a stalker, but just heightened for the story. She’s so weird and awful, but she does stick to her internal logic. I really enjoyed seeing what she’d do next. She’s so calculating and so unselfaware. So desperate.

I really liked the contrast of her home today and her past life, and the lives of the rich people she photographs. It made for some great visuals in the writing, with their styled homes and beautiful lives contrasted with her cheap and empty one. For her, there’s a warm glow around her clients that she can capture in photos but never capture in her own life. Without giving anything away, she does meet and date a wealthy guy and she does have a real talent as a photographer, which means that she could, on the surface, create a life like the ones she’s obsessed with. But she doesn’t have something internally that would allow that. She wants what they have, and she needs to insert herself into other peoples lives.

I know that this kind of book, where the main character is the antagonist and we see the world through their obsession, has been done before and is it’s own subgenre now. I’m not sure that I’d say that this book is really original in that sense, but I just enjoyed the crazy ride that is Delta Dawn. It was a lot of drama and so it was fun, and I kept wondering how much Delta was going to get away with.

Read It If: you’ve ever had that friend who lies to make themselves look good… This is a dramatic read with a train wreck lead character, and it’s really entertaining.

Thank you Minotaur Books for the ARC of this book for review.

The Photographer is out 25th May.