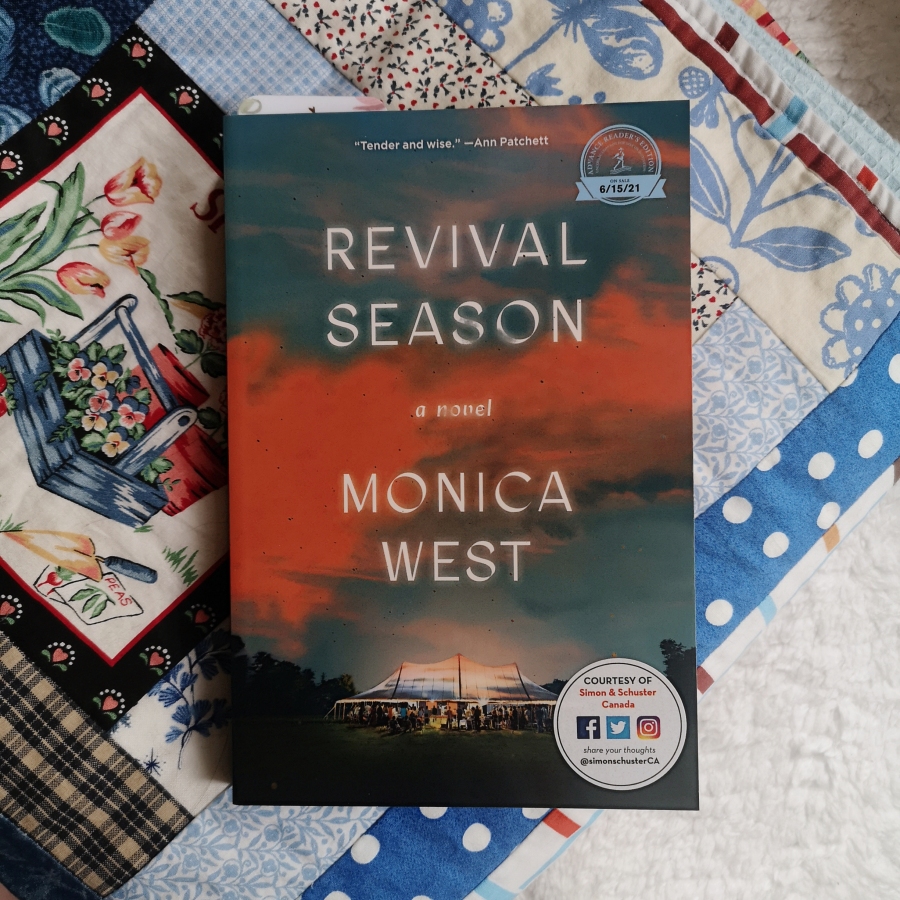 Revival Season is Monica West’s debut novel, and it follows a Southern black Evangelical family, through the eyes of the main character, Miriam, the 15 year old daughter. Miriam’s father is a Baptist preacher and faith healer, and each Summer they travel with him to tent revivals, where he heals the sick and injured through faith. While the tent revivals bring in a lot of fame and fortune, last year, her father struck a pregnant 12 year old girl, and Miriam is starting to lose her faith in her father, who is violent in the home as well. When Miriam seems to have the healing ability that her father doesn’t, she begins to question everything. Didn’t her father always tell her that women can’t faith heal and that there only place is serving men?

As someone outside the US, tent revivals and faith healing have an odd fascination for me. I think the first time I saw them was on a re-run episode of the X Files or Supernatural, for example. It’s a a bit like televangelism and snake handling: I have heard about them but they’re not something that I’ve ever seen in person. I’m not one to look down on anyone else’s religious beliefs, so I was interested to read a story with this setting that was not sensationalised or in the horror genre. But I also went into this aware of how many scandals there have been around these kinds of things and I’m aware of how easily led someone who is desperate for help might be.

The reason I’m saying this is really that I didn’t get this book. Monica West writes well, and she paints a portrait of a family in crisis and a family who endures domestic violence really well. She doesn’t judge her characters or give them a dramatic and unrealistic easy answer. The letter that the publisher sent with the ARC talks about escaping into this book, and that it helped them make sense of a current loss of faith in beliefs and institutions. So, perhaps if you read this, you’ll get that from this book. But I really didn’t.

To me, I was reading another book about a violent father and how religion is used as a way of shaming a family into being compliant and pliable. It was sad to read about a mother trying to leave a violent husband and being unable to go through with it, and of how a woman in this situation has no control over her body, the husband basically having the right to rape his wife because he wants her to be pregnant again. And I think it was implied, though I could be wrong, that the father of the pregnant 12 year old’s baby was Miriam’s father. It makes sense that Miriam would have a crisis of faith as she loses faith in her parent, but as she starts to think that she has healing abilities I got confused. If she thinks she can heal, then she isn’t having doubts about her religion. And are we meant to understand that in the context of the book, that these healing abilities are real or not? The book ends with nothing really changing, no one really growing, and a really ambiguous ending paragraph. I felt cheated. Nothing really happened in this book and nothing changed.

I think as an outsider to all of this, maybe I just didn’t really understand this book. I didn’t get the authors point. And to read a sad story like this, which is not easy and fun to read about, I would like to get it. It felt like just another book about how religion can be used as a cover for familial abuse, another story about domestic violence, another story about a religious leader who is actually a fraud. But this isn’t news to me. I was wondering if this was actually a Christian/religious book, and maybe that’s what I wasn’t getting?

Read It If: I didn’t love this one, and I think it even frustrated me a little by not going anywhere or saying anything new, but I do think the author has a strong grasp of character and motivation. I can see on Goodreads that it really resonated with some people, so if you think it’s for you, give it a try.

Thank you Simon and Schuster Canada for the ARC of this book for review. Revival Season is out June 15th.