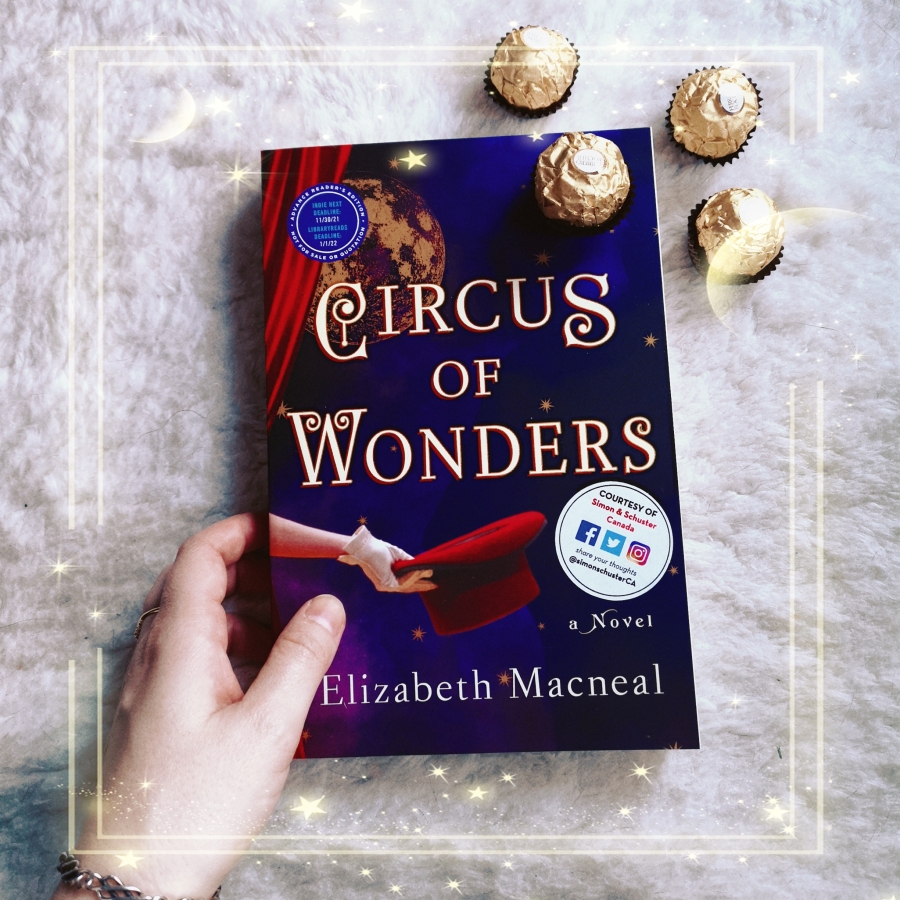 In 1860’s England, Nell, whose body is patterned with birth marks, is sold by her father to Jasper Jupiter’s Circus of Wonders. Jasper initially buys her without seeing her, because he notices his younger brother Toby’s romantic interest in her and he always has to one up his brother. But Nell has a real talent and soon Jasper is struggling with a performer whose fame eclipses his own.

Macneal also wrote The Doll Factory, which I read and quite liked. That was also set in a similar time period and place. I seem to remember there was also a theme of siblings being explored, to some extent. Here we have Nell, who is close to her brother, and also Toby and Jasper. The siblings here are so close that one is made smaller, is stifled, and the other becomes the leader. Nell comes to realise that her brother protecting her was keeping her from being her true self. (This really didn’t feel fully realised and fleshed out to me though). And then there’s the toxic bond between Jasper and Toby.

Jasper is more outgoing, more vibrant, and Toby is more shy. It seems almost like they’re twins, but I don’t think it’s ever stated explicitly that this is so. They’re not identical, physically they’re quite different. Jasper is intensely controlling, and he does this through shaming and excluding, teasing, love bombing. And holding Toby’s secret over him. On the flip side, Toby is a gentle giant who is rarely provoked to anger, and who has a more empathetic personality. He follows his brother everywhere, and is symbiotically close to him. For me, these two and their story really dominates the book. Nell is fairly dull and never felt fleshed out to me. She’s very one note. So it’s really these two who keep the story going.

A lot of the two brothers is back story. We’re given a little hook: when the two were in the Crimean War, something happened with someone called Dash, and little bits of the mystery are given to us as the story progresses. For a book set in a circus, there is a lot of sitting around talking about feelings and a lot of Crimean War. The book tends to cut away from any performances. But we do get some facts thrown in that feel like they’re lifted from a history book, about how bad circuses were. Why not show us that by showing us the circus, rather than talking about Barnum and Bailey or the Crimean War? Also, the end of the mysterious backstory felt really anticlimactic.

Actually, the end of the whole book felt off to me. None of the relationships are resolved, no one really grows, it just felt bland. Also, the characters do things that there are then no repercussions for, which felt unrealistic, and therefore not satisfying.

It’s not a bad book on the whole. I feel like it’s set up well. I liked the side characters, like Stella, and there’s a bit of atmosphere. The romance with Nell and Toby has some nice moments. The book is perhaps at it’s best in the Crimean War sections, where there’s plenty of drama. There’s some good stuff here, but it just isn’t satisfyingly plotted and resolved for me.

Read It If: give this one a try, and see if you like it for yourself. I would read this author again, I think she has talent and interesting ideas. This one felt a little uneven and maybe the author lost her way a bit, but there’s some good stuff here.

Thank you to Simon and Schuster for the ARC of this book for review.

2 thoughts on “Circus Of Wonders by Elizabeth Macneal”