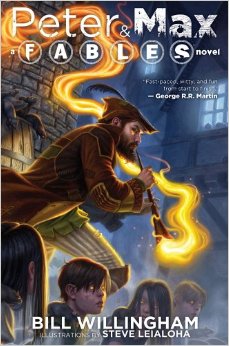 Some of you might know of the Fables from the comic books, personally I came across them from the Tell Tale Games adaptation The Wolf Among Us. This novel with illustrations comes from the same world.

In this arena, the characters from popular rhymes and fairy stories are characters that have fled their own world, and now live in New York, following a war in their own worlds. This story is about two brothers Piper, Peter and his older brother Max. When Peter, the younger brother, shows more musical promise, his father gives him the family flute, a magical instrument carved from the finger bone of a frost giant. Mad with jealousy, his older brother Max starts on a dark path of revenge including murder and obtaining another magical flute from a witch in the forest, which gives him unspeakable power. Peter realizes he must face the evil his brother has become, and the past that binds him and his love in sadness.

The story moves quite quickly, with two timelines, the past unfolding in alternating chapters with the present. In places, it’s interesting fantasy, but perhaps because of the nature of the subject, children’s stories, the novel always feels a little forced and awkward. Basically, it’s all a bit lame (calling mundane people “mundys”) and done to death (so many adult versions of fairy tales around now). But it will please younger, teen readers, perhaps.

Read It If: Fans of the Fables world should be pleased, and perhaps younger readers, but it’s nothing special, though the illustrations are very good.