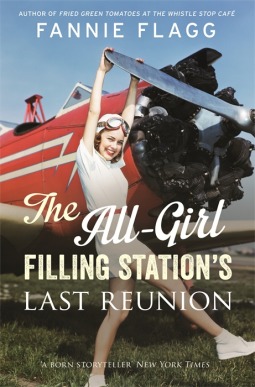 I think I’ve read all of Fannie Flagg’s books, and loved every one. The most famous is perhaps Fried Green Tomatoes at the Whistlestop Cafe, which was made into an excellent film. In fact, the author is an actress herself!

What I love about her books is that they’re about the simple things in life, and how complicated that can be. Set in the Southern States of America, they focus on women usually, and life, children, family, love, and getting through times of change. Often her later books focus around characters that you’ll find, or are mentioned, in other volumes.

This book is about Sookie, a woman whose life should in some ways be winding down, as her children have all grown up, and the last one of the four has just gotten married. But Sookie is about to find out that she “isn’t who she thinks she is” when she receives a bundle of papers that inform her that she was adopted. Her relationship with her colourful and overbearing mother has always been a huge responsibillity and shadow over her life, and Sookie starts to question everything, including her feelings of being a failure or dull.

Into this mix is the story of Fritzi, the biological mother of Sookie, and her story of growing up in Pulaski with her sisters, and working at their fathers filling station, which they ran during the Second World War while the men were away. Fritzi is an amazing, dynamic woman, and she and her sisters learn how to fly planes, and join in the war effort.

The story is beautiful, in that it’s full of heart, warmth, humour and mystery, as well as things like falling in and out of love, what it means to grow as a person. Sookie is lovely, and I often found myself laughing out loud at something she or Fritzi did or said. But it’s also very moving to read about her struggle to define herself and to learn to say no to her mother, or not care what people think. I think we all struggle with that from time to time.

It’s also incredible to read the history of women during WW2 and how their work flying planes was swept under the historical carpet. I was fascinated.

I loved this book.

Read It If: you’ve ever struggled with who you are and who you want to be.