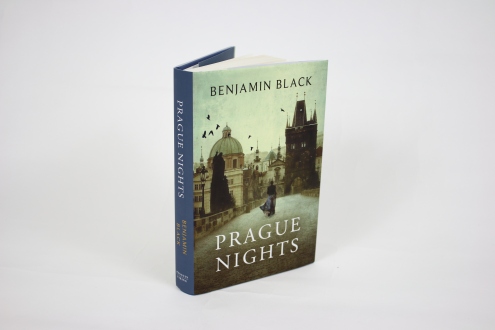 Prague Nights is a historical crime novel from Man Booker Prize winning author John Banville, whose pen name is Benjamin Black, and who is well known for the Quirke crime series. This book was sent to me by Penguin books for a review.

Although this book starts with a murder, it’s really about intrigue at the court of the emperor, and all the ruthless machinations that go with it. Christian Stern is a young man with more ambition than experience. A man with a doctorate and a love of knowledge, he heads to Prague, where the Emperor Rudolf is known for his love and patronage of the arts of science, astronomy, alchemy and the magical arts.

On arrival, Christian stumbles across a girl in the snow and realises that her throat has been torn out, brutally. Unluckily for him, he has discovered the body of the emperors mistress, and is drawn into the court as part of the investigation. And nothing in the court is as it seems, everyone is playing a game.

It’s a funny, sexy book, full of feasts and foreboding, murder and mystery. Of course, you want to know who killed the girl, but, much like Christian, you’re strung along through the court, meeting all the players: the misshapen dwarf, the emperors other mistress, the debauched prelate, and the warring chamberlain and high steward. Any one of them could have done it, but as the plot unfolds, it seems there’s a lot more going on than just one simple murder.

I love the way history and a good yarn are woven together. Where the author takes liberties with historical figures a little, he’s true to the politics and science of the time, which I found really interesting. I also loved that this book feels quite dark, and yet somehow I found it kind of humorous too. I love that everyone has their own agenda, but it’s not always clear what that is, and how it’s all connected, and Christian is trying to figure it all out but at the same time, is seduced by life at court.

Really entertaining, I loved this book. It’s been compared to the Shardlake books, but I feel like it’s a bit Shardlake meets Game Of Thrones. Highly recommended.

Read It If: you love stories of life at court, historical fiction, and murder and intrigue. Delicious.

Prague Nights is out on June 1 in hardback for £14.99 from Viking, or as an e-book from Penguin, get your copy HERE. Find out more at Penguin.co.uk. Join the conversation on twitter @BenBlackAuthor or #PragueNights