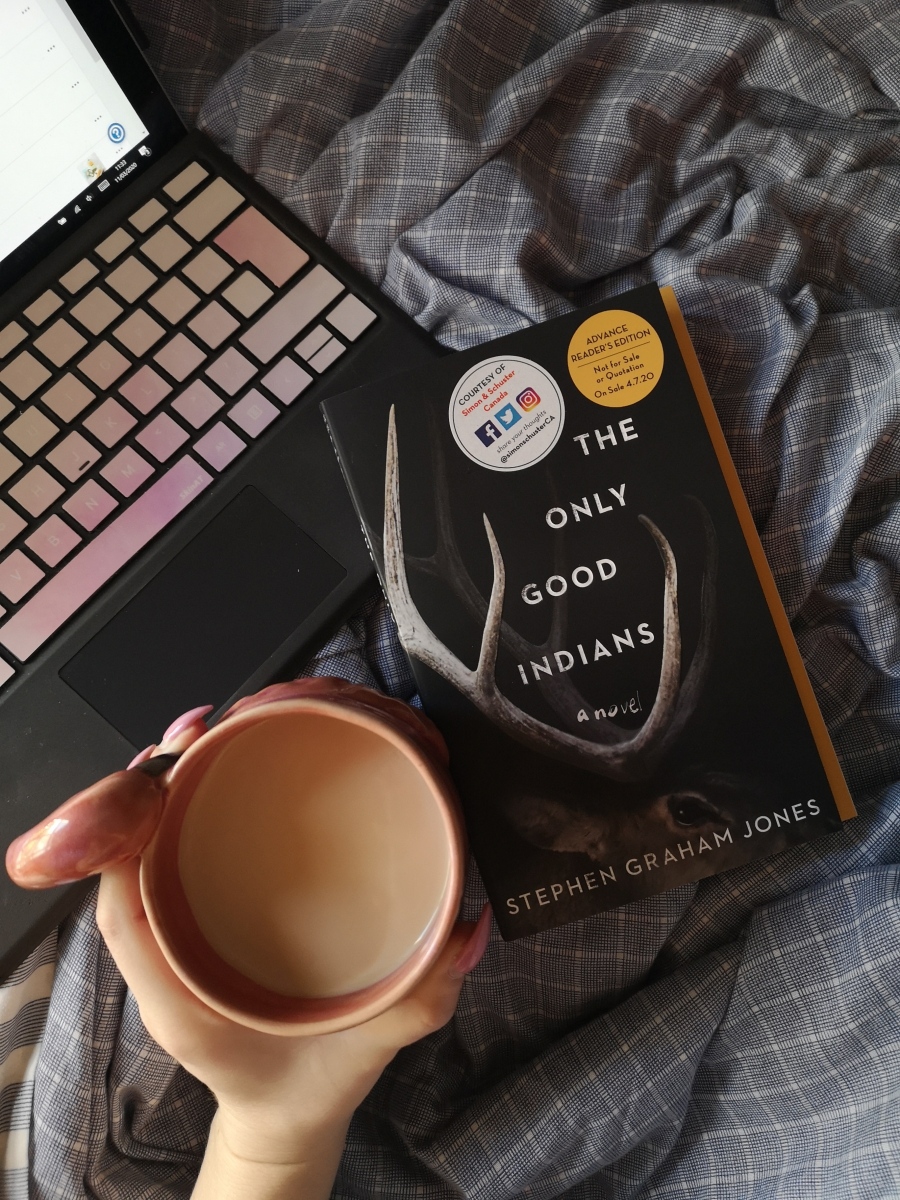 The Only Good Indians is the story of four indigenous men who went on an illegal elk hunt on their reservation when they were teens and set off a chain of events that stayed with them for ten years. Now, they have all gone in different directions, some staying, some moving away, some settling, some unable to settle, but now, their past is back to haunt them.

Isn’t this an epic cover? I love it. When you run your fingers over it, the antlers are embossed and feel slightly rough. It’s beautiful and dark, and fits the story so well. I was so excited to crack this open and immerse myself in it. The only thing I knew going in was that this book is said to be like “the Jordan Peele of horror literature”, in that Stephen Graham Jones is an indigenous writer telling us a scary story about things that happen to indigenous characters. I was honestly so excited.

And, oh my God, I was not disappointed. Jones writes in a literary way, with a really nice, original use of language that’s evocative and in some ways colloquial, but also has a grasp of emotion and psychology which makes this book both poetic, heightened in some ways, and also down to earth. Some horror books have simple language and don’t try to be more than a scary story, which is great, but this book I think has something more akin to Shirley Jackson: more than just a fun, spooky tale, it’s literature too.

I love that the story opens with a chapter that draws you in with a punch, and then moves on to telling us about a different character. I felt like, OK, this is our protagonist, things are starting to get weird, and he’s going to figure things out, he has this impending sense of dread and fear that’s getting under my skin…. and then it started to get batshit crazy and scary and more scary. I loved it. I was not sure where it was going and what was going to happen. What happened on that elk hunt? I was afraid to find out…

It’s not just scary story territory though. It’s also funny. I like that Jones describes a big malamut dog as a “malamutant” or to awkwardly carrying a ladder as “three stooging” it. There’s also plenty of cynical jokes about how white people are or the way Indian life goes, which adds to the whole atmosphere of the story and it’s milieu and also the kind of banter old friends have who have grown up together. I really enjoyed reading a story from a perspective I don’t know much about, (can we have more like this please?) and felt like the way that the protagonists saw themselves as not having much future (meth, diabetes, unemployment are part of reality on the Reservation, as well as racial profiling) lend a sense of doom, like a dark cloud hanging over.

This book just felt different and interesting. It’s not a conventional genre story, and it has a perspective we don’t see much, and it’s used to great effect. I felt like the book did slow down some in the last section (can you tell I’m trying not to tell you too much about this book?), there’s a basketball game that kind of lost my interest a bit, but I like the creepiness, and sense of inexorability of revenge. I think that you could say that the reveal of what’s going on about half way through kind of undercuts the mystery element, but it’s still a compelling narrative. I recommend reading it without knowing too much about it, and just going with it.

Read It If: you like scary stories, it’s a really good one. It’s also dark, sometimes funny, and feels like literary fiction meets horror. I hope we get more from Stephen Graham Jones.

This arc book was sent to me by Simon and Schuster for an honest review, and all opinions here are my own honest ones.

The Only Good Indians is on sale April 7th.

6 thoughts on “The Only Good Indians by Stephen Graham Jones”