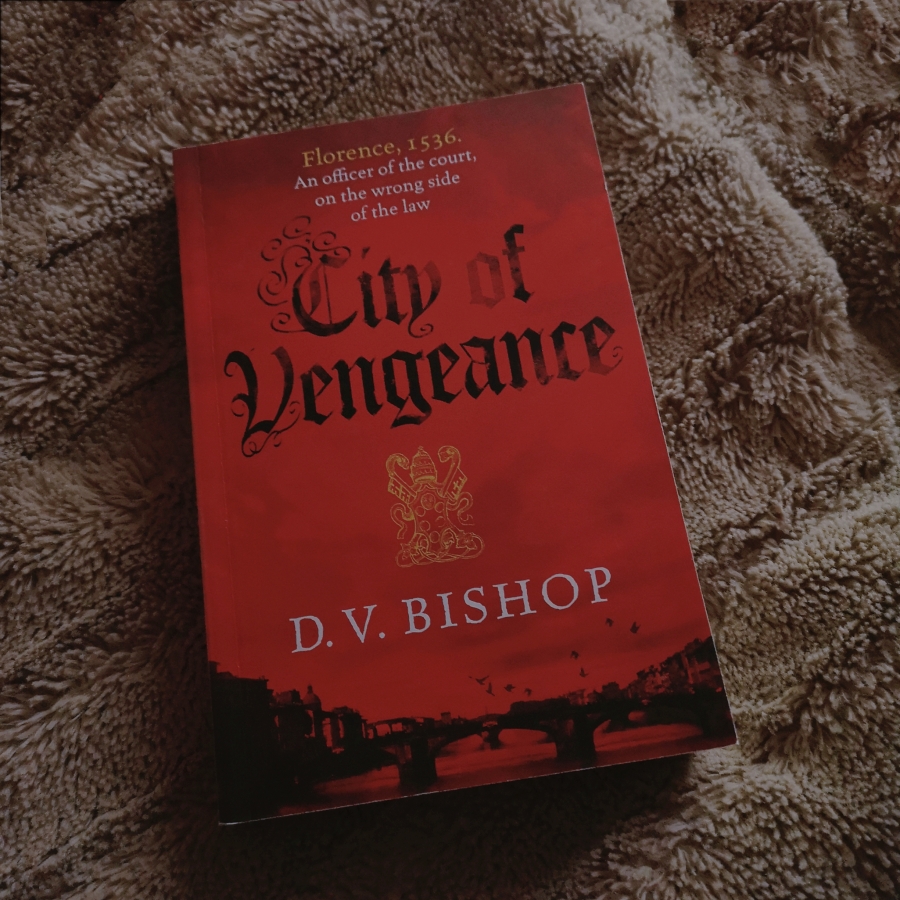 Set in 1500’s Florence, City Of Vengeance is the first in a series about Cesare Aldo, an officer for the city’s criminal court, in a capacity similar to a detective or policeman. When a Jewish moneylender that he has a connection to turns up murdered, the pressure is on to solve the case and find out what the man’s secrets were, and Aldo only has four days to do it. Added to that is another murder of a young man who also had many secrets, and one of them could destroy Aldo’s life: the fact that he’s gay. Secrets, lies and Machiavellian machinations go all the way to the top in this exciting new mystery thriller.

This is a debut novel from DV Bishop, and it’s quite a solid one. It’s also set to be a series about the title character, Aldo. Which I think is great. The book takes the tone of the entertaining, big name Summer holiday thrillers that are perennially popular, but it tempers that action and tone with really knowing the era and the way life worked in the time period. I think the mix of those two things is done so well.

The books creates a mood in Florence, with dark streets and the segregated areas, like the wealthy parts, the Jewish quarter, the streets where the prostitutes live and work. The characters are part of this mood: sometimes innocence living in a guilty city, sometimes the outwardly polite and inwardly scheming, sometimes the rough and tumble of those who live hand to mouth, all a part of the life of 1500’s Florence.

Aldo felt refreshing to me. His sexuality is part of who he is but it’s not the only defining part. He’s not a token character or a cliche, and I liked reading about a gay man who was investigating a crime. I was initially going to say that he’s one of the few gay detective’s in a series, but I have another series to share with you next week about a gay lead detective. So that’s neat. In this books, we see how in Florence at the time, the Church had a lot of control and they had deemed that being gay, or any sexuality other than the conventional, was a criminal act, and how people got around this or didn’t. It adds a layer of tension to the book.

The book has two linked plots with the two different murder cases, as well as the political intrigues and plots that were so much a part of life in Italy at the time. Aldo is part of both, but he’s joined by a younger officer who is focused on the young man’s death. There’s a lot of plot and characters here, and the book is long, but it’s fast paced and something is happening each chapter. I liked all the twists and turns, and there’s plenty of action.

On the whole, the book is good. If you like mysteries or thrillers, this will please you, but if you like accurate historical fiction, you’ll also be happy. It’s tightly plotted, full of details and little twists and characters who may or may not be what they seem. I think if the books remain at this calibre, it is shaping up to be a very entertaining series.

Read It If: you want an escape into the past that’s entertaining, twisting, and still feels fresh and relevant. It’s a good mystery and good historical fiction.

Thank you to PGC Books for the copy of this book for review. This book is out now.