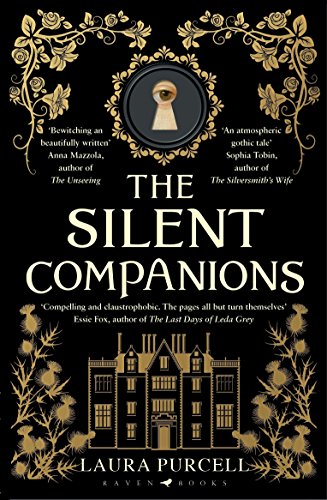 Elsie is sent away from London to avoid gossip and scandal when her wealthy husband dies just months after their marriage. Grieving and pregnant, she goes to her husbands crumbling family estate, the place where he mysteriously died, and where she must live with only the few servants and his dull cousin for company. But the old house has a dark history and the local people think it’s cursed. There are bumps in the night and strange things start to happen, especially when Elsie finds a wooden painted figure, shut up in a locked garret, called a Silent Companion.

Set in the 1860’s, The Silent Companions functions as a Gothic, haunted house style narrative, with influences of Dickens and Wilkie Collins, and focuses on mostly female characters. Unlike a lot of modern fiction set in the era, the book avoids cliches and feels well researched and nicely realised.

I love a good spooky story, especially if it’s set in the Victorian Era and has a crumbling mansion in it. This book feels really satisfying, with it’s dark elements of horror and fear, unfolding mystery and even pacing. Since this is a sub-genre that I enjoy, I was aware that in a lot of ways this book isn’t terribly original, but I did like going along for the ride and I was never bored. Purcell writes beautifully, intelligently and creates original characters and winding plots.

Read It If: you like Gothic style, Victorian era mysteries and ghost stories. It’s a dark, enjoyable haunted house read. (And the cover is gorgeous too!)